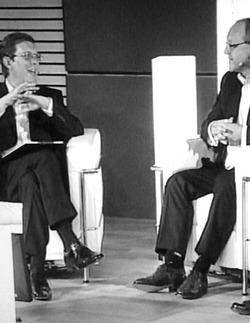 SEAT the Spanish car manufacturer owned by the Volkswagen Group holds the distinction of being the only Spanish car maker with the ability to design, develop, and produce its own vehicles.

SEAT is a young, sporty brand with a commitment to making cars that people love to drive. By virtue of extensive product development over the past 2 years, SEAT can genuinely claim to have ‘the youngest car range in the world’.

SEAT UK held their Dealer Conference at The Grove Hotel in Watford where they entertained around 350 guests. During the afternoon the Dealers attended a presentation where the SEAT UK Management Team were systematically interviewed by Shaun in ‘Michael Parkinson’ type interviews on their performance in the previous year and their plans for the year ahead.

“We needed a presenter with credibility. Having used Shaun earlier in the year on a series of Dealer Seminars we felt that he would ideally fit the bill” said Steve Robertson, Head of Marketing at SEAT UK. He added “Shaun genuinely made a massive difference and was the ultimate professional throughout the planning, rehearsal and delivery process. During the evening event Shaun used his extended repertoire and transformed into Compare and Voice of God to introduce the various entertainers. We certainly got our money’s worth!”

For more information, please click on the links below.

Please click on the above logo to view profile

This website uses cookies to improve your experience while you navigate through the website. Out of these, the cookies that are categorized as necessary are stored on your browser as they are essential for the working of basic functionalities of the website. We also use third-party cookies that help us analyze and understand how you use this website. These cookies will be stored in your browser only with your consent. You also have the option to opt-out of these cookies. But opting out of some of these cookies may affect your browsing experience.
Necessary Always Enabled

Any cookies that may not be particularly necessary for the website to function and is used specifically to collect user personal data via analytics, ads, other embedded contents are termed as non-necessary cookies. It is mandatory to procure user consent prior to running these cookies on your website.